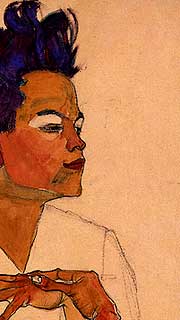 The Collection – Treasure Chamber and Laboratory
The Kunsthaus Zug collection includes various areas ranging from classical modern art to contemporary art and art of the surrounding region. For many years now, the collection has been the major focus of the Kunsthaus’s varied activities. Among the holdings is the most prominent collection of works of Viennese Modernism outside Austria, the Kamm Collection, which forms the Kunsthaus’s “treasure chamber”. A broad definition of the term “collection” comprises works in the public realm. With Project: Collection, the museum has developed a model – presumably unparalleled anywhere in the world – for collecting contemporary art, turning the Kunsthaus into a “laboratory” in the process.

The collection is presented in temporary and thematical exhibitions.

Classical Modern Art and Viennese Modernism
The Kunsthaus takes care of what is probably the most comprehensive collection of Viennese Modernism outside Austria. It comprises numerous works by some thirty artists. Highlights are the groups of works by Herbert Boeckl, Richard Gerstl, Josef Hoffmann, Gustav Klimt, Oskar Kokoschka, Egon Schiele and Fritz Wotruba.

A typical characteristic is the connection between fine and applied arts. Furniture, silver, drinking glasses, ceramics, but also architectural drawings and ornament designs from the Wiener Werkstätte (Viennese workshops) form a special focus. Together the objects provide a multi-faceted, concentrated impression of the Viennese Modern Movement of the early twentieth century.

The majority of these works belong to the Stiftung Sammlung Kamm (Foundation Collection Kamm) at the Kunsthaus. The Kamm family of Zug began collecting art in the 1950s. They were advised by the Austrian sculptor Fritz Wotruba (1907-1975), who had made the Kamms’ acquaintance during his exile in Zug (1939-1945). The unusual collection can also be considered an artist’s collection. Numerous sculptures and drawings represent the oeuvre of the most important Austrian sculptor of the modern period, who maintained close ties with the city’s art society – the Zuger Kunstgesellschaft – until his death.
Selected works on paper represent the modern movement in France and Germany and form consciously chosen points of reference to the Viennese holdings. Groups of works by Fernand Léger, Toulouse-Lautrec, Jacques Villon, Ernst Ludwig Kirchner, August Macke, Oskar Schlemmer, Kurt Schwitters and others.

Project: Collection
Project: Collection is the term designating long-term cooperations with artists of different nationalities. The concept emerged from a critical investigation of the problems associated with collecting contemporary art (transitoriness, exploding production, shortage of space). It is based on the idea that it is not material possession but continuity and the site specific aspect as well as the possibility of in-depth examination that represent primary aspects of collecting. Slowness is a professed aim, ephemerality is accepted. In this context the Kunsthaus does not understand itself as a supposedly neutral institution, but as an active partner of the artists. In some cases, the process-oriented, sustainable projects involve the public space and reach a broad public. Tadashi Kawamata (Tokyo) and Richard Tuttle (New York and New Mexico) were active in Zug from 1996 to 2000, Pavel Pepperstein (Moscow) from 1998 to 2002. Comprehensive publications on their activities were produced. Olafur Eliasson (Berlin and Copenhagen) began a long-term project in 2003.

Olafur Eliasson ‘The Body as Brain’ Project: Collection (1 & 2)
Olafur Eliasson (b. 1967) began his collection project with an artist’s newspaper which was sent to the members of our art society and the media in 2003. In the spring of 2004, the newspaper was used to realize a wall installation in the cafeteria, where it remained for some time. The next step followed in the summer of the same year – the internationally known Danish-Icelandic artist’s first major exhibition in Zug. Eliasson showed installations, a new light work, print series on Iceland and his spectacular model room, with more than two hundred fascinating study objects. An installation consisting of countless white Lego pieces provided visitors with a means of realizing their own ideas; they played and ‘worked’ with all intensity. Eliasson’s project entitled ‘The Body as Brain’ turns the museum into a laboratory for exploring the powers of perception. It will be continued in the coming years. > pictures

Olafur Eliasson | The Body as Brain – Project: Collection (3)
The Water Tower Concert – Project: Collection (4).
The large-scale water installation realized by Olafur Eliasson for Kunsthaus Zug in November 2005 remained in place in modified form until October 29, 2006. A wooden trough two hundred metres in length conducted water from the nearby Burgbach through the Daheimpark and the Kunsthaus garden, and from there back to the stream. The trough was then decisively enlarged: It now led to the neighboring Museum Burg and from there through the treetops along Burgbach Square, where, ultimately, a spiral tower (The Water Tower Concert) five metres in height conducted the water back to the stream by way of twelve seesaws. The project was developed out by the artist in close cooperation with Swiss partners.
Eliasson’s installation revolved around time as expressed by the element of water; it changed in the course of the seasons and was transformed in reaction to the changing needs of the museum.
Following the conclusion of a one-year cycle, the intervention was disassembled at the end of October 2006.
The cooperation with Olafur Eliasson within the framework of “Project: Collection” is being continued. > pictures

Tadashi Kawamata ‘Work in Progress in Zug’
In collaboration with a wide range of institutions, organizations and individuals, Tadashi Kawamata (b. 1953) realized a wooden path leading through Zug and ending at the Kunsthaus. Particularly worthy of mention is his contribution to the Zug outdoor swimming pool. Still in place today, the freely accessible installations forming the path make passage on foot easier, provide comfortable places to sit and invite people to stop and rest. Art goes to the people and seeks a dialog. New perspectives on ordinary everyday surroundings are gained. Kawamata’s long-term interventions set an entire city in motion and literally opened the Kunsthaus to the people. All of the project studies and plans, a group of models and documentations of Kawamata’s ‘Work in Progress in Zug’ and the photo essay by Guido Baselgia – which documents the entire project – have remained in the Kunsthaus collection.

Richard Tuttle ‘Replace the Abstract Picture Plane’
Richard Tuttle (b. 1941) concentrated on the museum’s interior, pursuing the theoretical theme ‘Replace the Abstract Picture Plane’ with his experimental activities. An artist who attained fame with small, sensitive, ephemeral objects, Tuttle surprised Zug by developing four very large works made of fabric, wood, metal, stone and wire, bringing his full incomparable creative potential to bear in the process. The works are fundamentally different from one another, and participate in a complex system of interrelationships which can be individually generated by the attentive viewer. This complex involves the entire building, turning it into a space of artistic experience. The metal and stone sculpture ‘Replace the Abstract Picture Plane II’ is installed permanently in the Kunsthaus garden. ‘Replace I, III and IV’, models and studies by the renowned American artist, and the comprehensive photo essay by Guido Baselgia are also in the collection.

Pavel Pepperstein and Guests
Pavel Pepperstein (b. 1966) – visual artist, author and the leading figure in the Moscow artists’ community of the younger generation – invited well-known and unknown guests from his native country to participate in projects in Zug. His guests in 2001 were Boris Groys and Ilya Kabakov. Pepperstein shone with his diverse and ingenious wall paintings, which were painted over at the end of every exhibition. Zug became a renowned address for contemporary Russian art – Project: Collection as a form of cultural exchange. For example, the artist was commissioned by the community of Menzingen to paint the walls of a school with imaginary landscapes which take viewers on a virtual journey around the world.
Pepperstein concluded his cooperation with Zug by executing wall drawings in the branch office of the Credit Suisse and in the canton penitentiary in Zug as donations from the Kunsthaus: a bank and a prison as sites of the extended collection. The works can be viewed upon request:

Traces of Pepperstein’s activities are also to be found in unexpected places in the Kunsthaus building (entrance, depot, stairway, offices), and can also be viewed upon request. In the courtyard of the museum the artists left behind a painted stone as a souvenir of the partnership. The collection moreover holds designs for posters and cards, a video installation by Boris Groys and the photo essay by Guido Baselgia.

Swiss Surrealism and Fantastic Realism
The Kunsthaus has been persistently expanding its collection of works of Swiss Surrealism and Fantastic Realism for more than twenty years. A conscious focus is directed here towards little-known or entirely forgotten names associated with the recent history of Swiss art, including those from Central Switzerland. The multi-faceted collection comprises groups of works by Serge Brignoni, Trudi Demut, Ignaz Epper, Walter Grab, Emanuel Jacob, Friedrich Kuhn, Gottlieb Kurfiss, Ernst Maass, Walter J. Moeschlin, Kurt Seligmann, Otto Tschumi, Max von Moos, Ilse Weber, Walter Kurt Wiemken, Eva Wipf and Muz Zeier. Selected representatives of a younger generation create links with the present: Miriam Cahn, Martin Disler, Josef Herzog, Dieter Roth and Klaudia Schifferle. Periodically, retrospectives are presented as a means of introducing these artists individually. With these activities, the Kunsthaus contributes to the scholarly study of a hitherto undervalued chapter of Swiss art, and to its conveyance to the public.

> Cumulus from Europe (click here to read article)
Reprint under permission of Parkett no. 76/2006 Zürich/New York