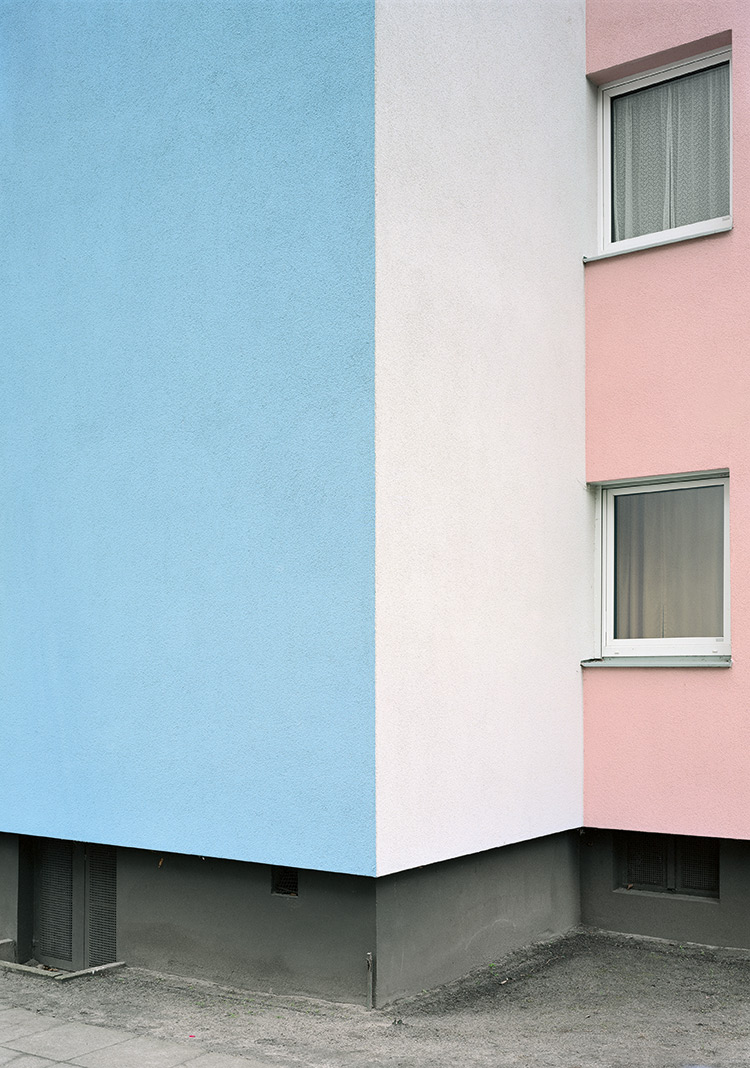 Forgotten and neglected. Cold, devoid of people and inanimate. When Lukas Hoffmann (*1981) cycles through Berlin, it’s the marginal areas that catch his eye. He grew up in Steinhausen in Canton Zug, and he went to Berlin after studying in Paris. He lives there now, and there he finds his subjects. Underpasses, house corners, building sites. Hoffmann likes what is desolate. He treats what is marginal with such circumspection that viewpoints, lighting and image details afford his analogue works a great sense of presence and aesthetic quality; they grow beyond themselves until they remind the observer of a painting. These urban brownfields are city outskirts – stagnant, provisional, overlooked – and they fill his images with life.

Once Hoffmann has found a place he likes on one of his forays, he goes back there. He works slowly, fastidiously. The weather, the seasons, the incidence of light – he leaves nothing to chance. He’s a constructor.
Hoffmann is someone who from the very start worked in an analogue manner, doing everything himself, from the darkroom to making enlargements and framing his works. He’s also a master of the techniques of different cameras. Greyscales are his piano keyboard, as it were, and he plays until his photographs attain the planarity or depth that he desires.
Visitors to the Kunsthaus Zug already could experience Hoffmann’s work in several group exhibitions. In early 2019, he will be making a photographic statement with a large solo exhibition, and will be putting new work from recent years on display for the first time in Switzerland. Besides urban architecture, he will also be exhibiting examples of an experiment in which he captures passers-by with a large, portable camera.
In collaboration with the Photoforum Pasquart and Le Point du Jour, this exhibition will then travel on to Bienne and to Cherbourg-en-Cotentin in France. It will be accompanied by a trilingual publication from Spector Books in Leipzig.