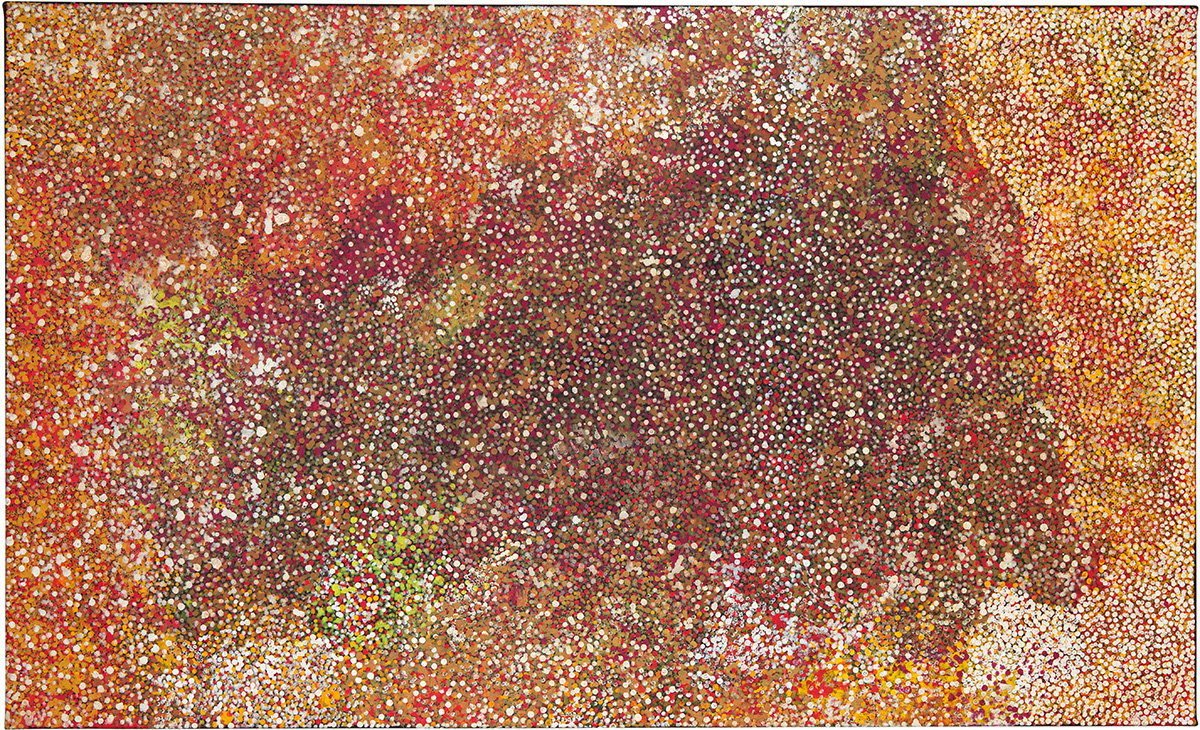 Outside it’s getting cold and grey, but inside warm colours are shining from far away – from a place where spring begins when we hold our autumn exhibition: Australia. Large-scale pictures whose warm tones are reminiscent of the light of a flickering candle, earthy and sensual. They tell stories of rituals and of a great sense of attachment to the power of nature. At the same time, these free, open pictures appear astonishingly modern.
The history of the area from which these shining colours originate is in fact a dark one.
They are from the Northern Territory and the region around Alice Springs, where Aboriginals were put in reservations, disenfranchised and dispossessed. Only in the last fifty years have they been acknowledged as citizens with all concomitant rights. In expansive deserts, uprooted people took to paintbrush, paint and canvas to express their identity in a unique manner. It was to this area that the Australian artist and art educationist Geoffrey Bardon travelled with painting utensils in 1971. First the local children started painting, then soon the adults joined in. Bardon was interested in the Aboriginals’ own aesthetic ideas, their myths and their custom of creating art on their bodies and in sand. He was interested in their origins. This was a time when society was only just beginning to offer them respect again, in a series of painstaking judicial steps. From the early 1970s onwards, their powerful pictures began to be highly regarded in art circles, and today they are found in the important art museums of Australia and in collections in the USA and Europe.
Joëlle Clément and her husband Pierre live in Zug, and also travelled regularly to the Northern Territory to meet some fifty artists with whose personal help they compiled their significant collection of Aboriginal paintings. In the Kunsthaus Zug, the Cléments are now making their collection accessible to a museum-going public for the first time. This is the first-ever thematic exhibition of contemporary Aboriginal painting in a Swiss art museum, though its significance has already been revealed in an artistic context in important institutions in Europe, Japan and the USA. This exhibition of the Pierre and Joëlle Clément Collection comprises a carefully chosen selection of some 80 works by 50 artists, both men and women, painted between 1998 and 2008.

Works by one of the most important and internationally celebrated artists among the initial representatives of this tradition can be seen here in a separate solo exhibition: Emily Kame Kngwarreye (*1910; † 1996), who grew up in Utopia (to the north-east of Alice Springs). After the end of the Aboriginal reserves, she lived and worked on a farm where she also found encouragement for her artistic potential. She subsequently won national and international recognition as an artist. In 1988/89 she began painting on canvas. Her works are closely connected to the landscape and the traditional rituals of her people, and they have been shown all over the world. Her paintings are to be found today in the collections of important art museums in Australia and the USA.
This solo exhibition at the Kunsthaus Zug is the artist’s first in a European art museum and comprises twenty choice paintings from different phases of her career from two private collections in Australia.